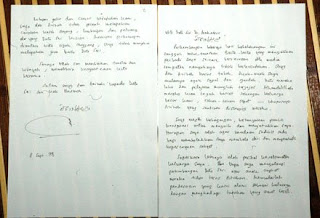 I would like to enlighten you regarding the calumnious campaign against me as a person and a politician. Considering the method by which the slander was spread and the timing of its release, I cannot but conclude that it was politically motivated. Only the two of us can clarify the muddied waters and untangle the knots.

The conspiracy to bring me down through calumny began more than a year ago with a poison-pen letter circulated so widely that it reached even the small UMNO branches. Normally, I would ignore accusations contained in unsigned circulars, but this time they were too offensive to be left unchallenged. I therefore lodged a police report on Aug 15 last year. I hoped then that the smear campaign would stop.

Imagine my consternation when I learned, a few days before the UMNO general assembly, that a person by the name of Khalid Jefri had written a book which in part repeated all the poison-pen lies and that the book would be distributed by the tens of thousands at the venue of the assembly. To prevent it, I had no choice but to get a court injunction.

Unlike the poison-pen letter, the book carries the names of an author and a publisher, as if daring anyone to challenge the truth of its contents. I had to go to court to make that challenge; otherwise some readers would suspect that there was truth in the book.

My confidential secretary, Mohammed Azmin Ali, made a police report over the distribution of the book, the contents of which are clearly criminally libelous, and I have appointed a lawyer to handle a civil defamation suit against the author and publisher. I have since won an interlocutory injunction, effective until the case is settled. The named suspects are the ones who should be subject to police investigation. According to the Information Act, the onus is on them to prove their accusations, to show admissible evidence in court -- not rumour, hearsay or fabrications.

But a week after my report was lodged it became obvious that the police were instead looking into my personal affairs. It was as if I had become the suspect. Their current behaviour indicates some malice towards me. Instead of concentrating on the libelous book, they are now listening to stories churned out by the rumour mill, which is operated by politicians and millionaires who are intent on driving a wedge between the two of us and cutting me down.

I see a picture of contradictions emerging, one that is unsettling. I do not object to the raid on the house of Datuk Nalla [a close friend and occasional tennis partner of Anwar Ibrahim awaiting trial on a charge of unlawful possession of live ammunition] and his arrest on the justification that these would help the police in their investigation. But I have since received information that the idea was to extract a confession from him that would incriminate me in activities that are immoral and disgraceful.

I am certain that the author of the book would not have made up such wild and fantastic accusations if he were not sponsored by influential personalities willing to pay him huge sums of money. I have indicated above that there is a factory churning out these lies. And there is no lie more hurtful to me - and the others who are implicated - than the one that says I have fathered an illegitimate child.

It shocked me to hear the police suggest that I undergo a DNA test. Eventually, my lawyers agreed to the test but proposed that it would be sufficient to carry out the test on Azmin, his wife and the affected child to confirm that the child issued from them.

Praise be to God, it was thus confirmed. The Minister of Science, Technology and the Environment, Datuk Law Hieng Ding, himself telephoned me to give the good news. But now, telephone conversations from my home, which are recorded by the police, have become an issue. I am accused of being a foreign agent.

Many stories have been woven regarding the role of Datuk Nalla, indeed about all the friends I play tennis with and several of my officers. I play tennis once or twice a week at the Tropicana, Kiara or Bangsar. There are stories that have been concocted about activities besides tennis during my tennis hours, complete with the name of a woman, a car registration number and an apartment number at Tivolli Villa.

They are all lies.

I play tennis openly, not in secret, beginning around 6.15 pm and stopping before the Maghrib prayers, although I would sometimes stop for Maghrib and continue with a game afterwards. Every time I play, there are policemen posted outside the tennis court. My tennis games are never played in secret and they are always under police watch.

I have also been accused of meeting a woman at the Flamingo Hotel, a place I have never set foot in. And I have been to the Tivolli Villa only twice -- accompanied by Azizah [Anwar Ibrahim’s wife] – to visit my adopted sister, Sukma.

I have been told that I may be charged under the Official Secrets Act. What a baffling thought! To charge under this act a person who holds the second-most important position in government is nothing short of insulting. If it were true that government secrets had leaked, this would be the first time in history that the immediate suspect was the Deputy Prime Minister.

Please do not let the lies of the envious cause you to doubt it. They are but a political conspiracy.

For more than a year, the police have known of a plot to drive a wedge between the two of us by raising doubts in the public mind regarding my character. (The report is hereby submitted by hand).

I attach here also Dato' Nalla's affidavit and clippings of press reports on them. It is clear that his detention and interrogation have nothing to do with national security. Instead he has been promised his freedom provided he signs a statement prepared by the police to disgrace his friends.

I would also like to inform you that a police officer has telephoned a former Universiti Kebangsaan Malaysia lecturer to extort a statement from him to the effect that he once had a homosexual relationship with me. He was threatened with prosecution on charges related to his past activities.

These are additional pieces of information that support my conviction that all those lies about me were concocted as part of a political conspiracy. I submit this for your wise consideration. And may God give you peace and blessings.
Anwar Ibrahim