KUALA LUMPUR: Letters warning about the dangers of working with former prime minister Dr Mahathir Mohamad have been issued since the inception of the Citizen’s Declaration, according to Solidariti Anak Muda Malaysia (SAMM) chairman Badrul Hisham Shaharin. 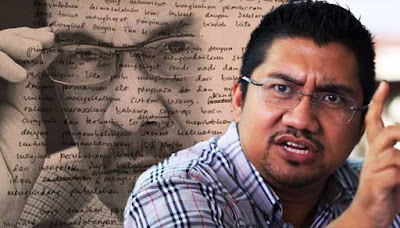 Speaking at a press conference here today, Badrul Hisham, also known as Chegubard, said jailed former Opposition leader Anwar Ibrahim’s letter detailing the perils of working with Mahathir came as no surprise as he had already written many letters which were “unfortunately” either ignored, kept secret, or misconstrued by both party members and the public to the point where he was “forced to write such a detailed and long letter”.
He was referring to former News Straits Times Group editor-in-chief Kadir Jasin’s recent questioning on the timing of the recent letter.
“I, for one, who have long been involved in the Reformasi struggle, am ashamed that we need such a clear signal from Anwar before we begin to pay attention to what is happening,” said Chegubard.
He added that many PKR members had forgotten their place, and that when they decided to work with Anwar’s nemesis, they had put Anwar, the Reformasi movement, and the people who believed in the Reformasi struggle, on the backbench.
“Don’t forget you were put in your place by the people, so don’t be deaf to them. When you cross Anwar, you cross Reformasi activists and that will only create trouble for you.”
MaSSSA (Pertubuhan Solidariti Madani Malaysia) chairman Mustapa Mansor, who was also present, said since the Reformasi era in 1998, those who had struggled for the Reformasi movement had been “on standby” for letters from Anwar.
“Those who are asking why Anwar has only now decided to write this letter do not know much about the history of the Reformasi struggle,” he said.
When asked to comment on PKR President Dr Wan Azizah Wan Ismail’s statement that the letter was meant for party members, Chegubard said because Anwar was a public figure, anything he wrote was meant for the public.
“Previously, before Anwar was first put in prison, he made a video that was meant for his children. That video was used by all Opposition parties and activists for the Reformasi struggle.
“Why didn’t they say back then that ‘this video is meant for his children?’ He is a public figure and even letters given to his children are items that the public needs to pay attention to,” he said.
klik untuk baca lanjut : http://chegubard.blogspot.my/2016/05/surat-panjang-anwar-dan-sogokan-wanita.html
by cheguBard at 10:33:00 AM