He said the crowd that had gathered there swelled from a mere 200 people just after midnight to more than 1,000 by about 2am.

“The demonstrators forced open the locked gates and started breaking temple property, prompting the temple committee to lodge a police report,” he said.

Minutes later several trucks of policemen, including those in plainclothes and members of the Light Strike Force unit, arrived at the temple and told the demonstrators to disperse.

However, they refused and instead fled into the temple premises, when police gave them a last warning.

When policemen pursued them, the demonstrators pelted and attacked them with stones and inter-locking bricks, resulting in several policemen being injured.

The demonstrators also threw a Molotov cocktail at a tourist charter bus, setting in on fire. They also shattered the windscreens and windows of several passing cars by throwing stones and bricks at the vehicles.

Musa said no tear gas or water cannons were used at the demonstrators during the incident.

As at press time, police were keeping a close watch on the area. 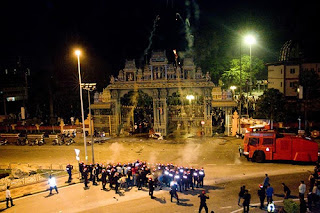 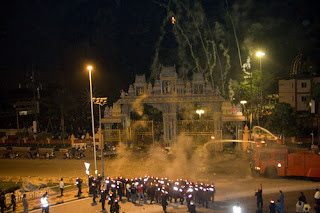