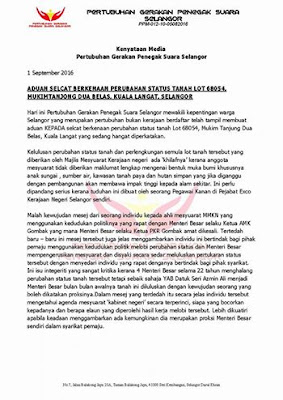 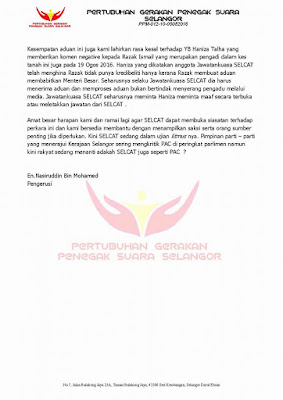 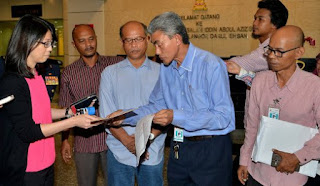 
SHAH ALAM, Sept 1— An NGO today demanded Selangor’s Select Committee on Competency, Accountability and Transparency (Selcat) convene a special meeting to deliberate on the alleged land status change for the Paya Indah Wetlands.
Pertubuhan Gerakan Penegak Suara Selangor chairman Nasiruddin Mohamed accused Selangor menteri besar Datuk Seri Azmin Ali of having approved the land status change.
In a press conference here, he said that the NGO is also willing to produce witnesses and “key important sources” to Selcat should it be needed to facilitate investigations into the matter concerning Lot 68054 in Mukim Tanjung Dua Belas in Kuala Langat.
“The party leadership helming Selangor’s administration always criticise the parliamentary Public Accounts Committee (PAC) on matters of accountability. Now the people are waiting to see if Selcat too is like the PAC,” Nasiruddin said.
He had earlier submitted a memorandum on the controversial alleged land status change, to a representative of the Selangor Speaker and Selcat chief, Hannah Yeoh’s office at the Selangor State Secretariat Building here.
In his memorandum, Nasiruddin alleged that Azmin had approved the land status change knowingly, in the interest of his proxy who had allegedly acted for a property developer.
“A recently leaked message from the individual show that this person acted on behalf of the developer using his political position to lobby for the status change and the menteri besar who had chaired the (Selangor Executive Council) meeting is suspected to have knowingly approved the land status change, with the knowledge that the person lobbying for it was acting for the developer.
Nasiruddin said that the alleged proxy seems to have ‘inside knowledge’ as to the agenda of the State Executive Council (exco) meeting and also expressed suspicion, alleging that the person could possibly be Azmin’s proxy set up within the developer’s company.
“This is a very critical matter concerning integrity as the four menteri besar before this, had for 22 years opposed the land status change but as soon as Datuk Seri Azmin Ali took over, and at the very early stages of his leadership, the status change for the land was approved,” he added.
In July, Bernama reported Azmin saying that the state government would cooperate with the relevant authorities investigating the matter.
Prior to that, Selangor Tourism, Environment, Green Technology and Consumer Affairs Permanent Committee chairman Elizabeth Wong had acknowledged that the Selangor government had developed Lot 6850, covering 619 hectares in Mukim Tanjong Dua Belas, Kuala Langat.
However, she reportedly said the land was privately owned land and not a wetland reserve.
Prior to that, PKR member Badrul Hisham Shaharin had also accused the state government of rezoning the said land, a claim that was later denied by Wong.
News portal Free Malaysia Today reported Wong saying on July 26, that the allegation first made by Badrul, also known as Chegubard, was false and an attempt to discredit the state government.
- See more at: http://www.themalaymailonline.com/malaysia/article/ngo-wants-special-selcat-meet-to-discuss-paya-indah-wetland-status#sthash.Kcl2BhMt.dpuf
by cheguBard at 5:23:00 PM