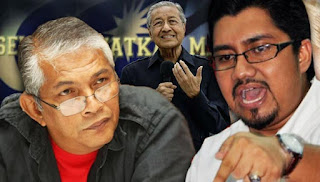 PETALING JAYA: Several well-known opposition and anti-establishment figures have come out against the Citizens’ Declaration put forward under the patronage of Mahathir Mohamad last week, because of his involvement.
They called for opposition supporters to reject Dr Mahathir as the leader of the “Save Malaysia” movement which arose out of the declaration.
Badrul Hisham Shahrin, or Chegubard, led a group of opposition supporters at a gathering on Saturday, with speakers from various groups questioning the aims and basis of the movement.
The 37-paragraph declaration contains an extensive list of complaints and allegations about 1Malaysia Development Bhd and calls for the ouster of Najib Razak as prime minister. It also calls for reforms of the country’s political institutions.
Chegubard, a controversial figure in PKR, called out Dr Mahathir for his past transgressions against the people and the country during his 22 years as prime minister.
He said the declaration was “a dead end”. “This is just a clash between Mahathir and Najib,” he said, according to Star Online. “We have been fighting against both of them. Why is it that now we must choose between them?”
Another pro-opposition figure, lawyer-activist Haris Ibrahim questioned the basis of the declaration. “Why does this initiative, this citizens’ declaration exist? It is because the people are scared. It is because the people did not rise up,” he was reported to have said.
Haris was among those who initiated the People’s Declaration in the late 1980s, with a range of opposition and pro-reform supporters. That declaration contained an extensive list of objectives and a programme of legislative and other changes to improve Malaysia’s political and legal systems.
Badrul said those who attended yesterday’s meeting believed that Dr Mahathir was only using the declaration and the “Save Malaysia” campaign for his own political agenda and not in the wider interests of all Malaysians.
“We cannot raise him up as a figure of change,” he was reported to have said. “If he fights, that’s all right. If we (the people) make use of him, that’s all right. But to prop him up as the leader and place him in the front, that is not right.”
Kohi Kogi, a member of Jaringan Rakyat Tertindas (Jerit) questioned why the public was not consulted about the declaration before it was signed by the 45 signatories, most of whom were opposition politicians and members of civil society.
“Why was there no consultation? Why was no feedback taken? Why so secretive?,” he was reported to have said. “Bersih was about to have a roadshow. If they were going to organise a roadshow, why didn’t they use the roadshow to get feedback before signing the declaration?”
http://www.freemalaysiatoday.com/category/nation/2016/03/13/chegubard-haris-reject-dr-m-as-a-figure-of-change/