Plantations are not forests! 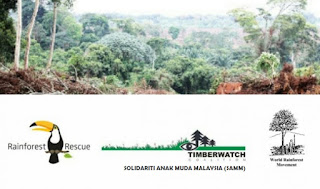 FAO definition must recognise that plantations are not forests!
On March 22, 2017, the International Day of Forests, 200 organisations have reminded the UN Food and Agriculture Organisation (FAO) that it’s misleading forest definition dating back to 1948 must be changed.
The definition has allowed the plantation sector to hide the devastating ecological and social impacts of large-scale monoculture tree plantations behind a positive forest image.
FAO’s forest definition has allowed the plantations industry to call their monoculture plantations of fast-growing species such as eucalyptus, pine, rubber or acacia “forests” because it defines a forest only by the number, height and canopy cover of trees on an area.
The FAO forest definition has been used as the blueprint for over 200 national and international forest definitions since 1948.
Under the guise of this FAO forest definition, the industry has been able to expand fast, especially in the global south, where monoculture tree plantations now cover some several tens of millions of hectares of land.
This expansion has brought misery to countless rural and peasant communities, and indigenous peoples.
Families have lost land and livelihood where monoculture tree plantations have taken their land, destroyed their way of life, dried up their water springs and streams and poisoned their food with agro-toxins.
“For almost 70 years, the misleading FAO forest definition has served the tree plantations industry well. They have hidden the destruction caused when diverse forests, grasslands and peatlands overflowing with life are converted into ‘green deserts’ made up of monoclonal trees in straight rows behind the positive forest image provided by the FAO,” says Winfridus Overbeek, international coordinator of the World Rainforest Movement.
Forest restoration as climate protection debate adds urgency to get forest definition right.
“With the adoption of the UN Paris Agreement on climate change, revision of this FAO forest definition takes on additional urgency”, says Guadalupe Rodríguez from Salva la Selva/Rettet den Regenwald, “it would be a tragedy if the misleading FAO definition makes expansion of these damaging tree monocultures eligible for climate funds earmarked for reforestation and forest restoration.”
This would not only harm even more communities where tree plantations take over land used by villagers but also undermine climate protection: Carbon-rich forests could be destroyed and be replaced by monoculture tree plantations with countries claiming that according to the FAO forest definition, no forest area has been lost – despite the massive loss of carbon, biodiversity, water sources and local livelihoods when forests are replaced by monoculture plantations.
An example where the deliberate mislabelling of plantations as forests allows the plantations industry to tap into climate funds is the ‘African Forests Restoration’ initiative (AFR100).
Launched at the 2015 UN climate meeting, it aims to cover 100 million hectares that participating African governments consider “degraded” lands.
The World Bank will make US$1 billion available for this plan – and relies on the FAO forest definition to define eligibility for funding.
Unsurprisingly, one of the most controversial tree plantations companies operating in Africa, the Norwegian-based Green Resources, was among the keynote speakers at a 2016 conference in Ghana, where the implementation of the AFR 100 initiative was prominent on the agenda.
FAO International Forests Day 2017 theme ‘Forests & Energy’ shows urgent need to change forest definition.
“Industrialised countries’ unsustainable energy demand combined with their new quest for ‘renewable’ energy is already converting forests in the global south into industrial ‘biomass’ plantations.
Yet, the word ‘plantation’ does not appear once on the FAO’s “Key messages” web page for the International Forests Day 2017″, says Wally Menne of the Timberwatch Coalition, South Africa.
For example, to fuel all of the UK’s energy requirements through eucalyptus­based biomass would require some 55 million hectares of plantation in Brazil – an area larger than twice the size of the UK.
Some 200 groups have joined the more than 130 thousand groups and individuals who called on the FAO in 2015 to rise to the challenge and urgently change the FAO forest definition because tree plantations are not forests.
World Rainforest MovementRainforest RescueTimberwatch Coalition
by cheguBard at 4:14:00 PM