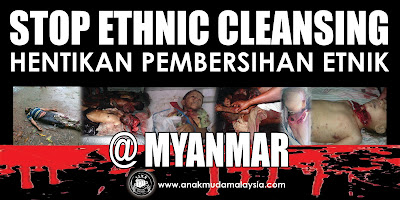 MEMORANDUM TO THE MYANMAR EMBASSY IN MALAYSIA.
STOP THE ETHNIC CLEANSING AND SUPPRESSION OF ROHINGYA IN MYANMAR, ALLOW HUMANITARIAN AID EFFORT AND START A LONG TERM HUMANE SOLUTION ADDRESSING THE PLIGHT OF THE ROHINGYA PEOPLE IN MYANMAR.

We refer to the above and the recent reports on the alleged acts of genocide, ethnic cleansing and suppression of the Rohingya people at Arakan Province, Myanmar. We strongly condemn these inhumane actions against the Rohingya people and call for immediate action by the Myanmar government to resolve the crisis and restore calm and public order in the Arakan Province.

We, the Malaysian people hereby demand the followings to be implemented immediately:

1.             That the Myanmar government immediately act upon these allegations and put a stop to the killings and the act of atrocities committed against the Rohingya Muslim minority in the Arakan Province.

We would like to strongly protest the acts of the Myanmar government in its unjust and double standard treatment of the Rohingyas ethnics in Myanmar.

We also call for the ASEAN member countries to demand that the killings and atrocities on the Rohingyas be halted immediately.

A review of Myanmar's membership in ASEAN must be made if Myanmar continuously refuses to act to stop the carnage.

We call for the United Nations to convene immediately for a special emergency session to resolve the plight of the Rohingya Muslims by pressuring Myanmar to comply by the UN Universal Human Rights Declaration on matters pertaining to protection of minority rights.

2.             We demand the Myanmar government to give access for humanitarian aid: food, medical aid and supplies to the Rohingyas through the international relief agencies monitored by the United Nations or ASEAN or the Organisation of Islamic Countries (OIC).

We demand that the humanitarian aid agencies be allowed to proceed in the flashpoint districts; Maungdaw, Akyab and Bathidung within the Arakan Province where thousands of Rohingyas had fled for safety especially at the Bangladesh border, the only route out to avoid from the spiraling massacre.

3.             Lastly, we demand that dialogue for the long term peace plans for the Rohingyas to begin between the United Nations, ASEAN and OIC with the Myanmar government.

We call for a reconciliation and national dialogue to be held to restore the citizenship of the Rohingyas in Myanmar and to recognize their rights as minorities.

The Rohingyas citizenship which was unrightfully taken away by your government in 1982 must be reinstated to show and prove to the world community that the Myanmar government are humane and tolerant to all its people.

We have strong faith that the Buddhist religion and its practices do not condone any act of violence. We believe Buddha will not condone the discrimination and inhumane act towards the Rohingyas which may lead to bad karma to the Myanmar people.

We can assure the Myanmar people that if you treat any human being well, more good and prosperity will come to Myanmar.

We believe that the act of aggression committed will only bring disgrace to Myanmar and the Myanmar government in the long term which will affect your country’s reputation among the international community.

Justice must not only be spoken, but must be acted upon!