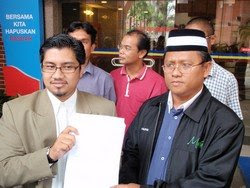 PKR has today lodged a report relating to a slew of cases involving top politicians to test the newly-minted Malaysian Anti-Corruption Agency (MACC).

This includes past corruption cases involving ministers which had not been prosecuted, money politics in Umno and allegations of corruption against present and past government officers.

According to Badrul Hisham, among the cases in his report were those involving former Malacca chief minister Abdul Rahim Thamby Chik and former International Trade and Industry Minister Rafidah Aziz.

"The report lodged today covers three areas - old cases where there is strong evidence of prosecution but no action taken, money politics in Umno and also present and past government officers alleged to be involved in corrupt practices," he said.

MACC, created as of yesterday, replaces the much-criticised Anti-Corruption Agency, and is being promoted as having more independence and greater accountability.

However, critics say that the new commission will also be toothless unless it is given unrestricted power to prosecute corruption cases - currently the responsibility of the attorney-general.

"The people are waiting to see if the MACC will act in the interests of the people or if the changes are just cosmetic," Badrul said.

"This is a test of the MACC to see if there is real reform and improvement or whether it is just rhetoric to get a bigger budget than the former ACA, but providing the same results in not being able to take action against big fish."

According to Badrul Hisham, there was strong evidence in both the Rafidah and Abdul Rahim cases, linking the two politicians to corruption.

Despite this, the Anti-Corruption Agency - whose tasks and functions are now taken over by MACC - could not press charges against the duo due to political interference.

Badrul Hisham showed a copy of the ACA investigating paper on Rafidah to prove his point.

In it, ACA stated, "We recommend prosecution to be taken as there is a strong prima facie case against the minister (Rafidah) and there are also four preferred charges made. However, we could not take action due to strong hands (interference) above the attorney-general."

"The matter involving Abdul Rahim also pertains to corruption allegations where there is also strong evidence but he was again never prosecuted," he said.

Badrul Hisham said if Prime Minister Abdullah Ahmad Badawi was sincere in his fight against corruption by enacting the MACC bill, the new commission should take action on all these cases.

"This is test for the commission as it has to convince the public that it is willing to take action against such individuals," he said.

The new commission is an initiative of Abdullah, who is trying to burnish his reform credentials before handing over to his deputy Najib Razak next March.

Badrul Hisham said he also lodged reports against Najib and the prime minister himself over money politics.

According to him, some of the documents which he submitted to MACC are still classified, while others have already been declassified, including the ACA reports on Rafidah and Abdul Rahim.

Badrul Hisham stressed that there are many other alleged corruption cases not included in his report today.

When asked how many cases he had lodged, Badrul Hisham said there were “several” but he could not give the exact numbers.

“If the commission failed to react to these, then taxpayers like you and me would be frustrated as our money is being wasted to fulfil the political rhetoric in the war against corruption.

“Is it (MACC) out to get the small fish which would see them prosecuted while the big fish escape as a result of their political connections?" asked Badrul Hisham. - petikan Malaysiakini.com