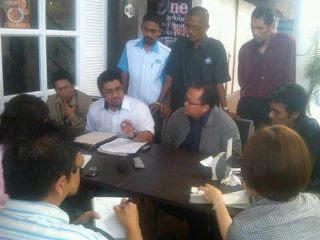 Contrary to Malaysia’s pro-Palestine campaign, a youth group has alleged that Johor companies have been trading palm oil with their Israeli counterparts.According to Solidariti Anak Muda Malaysia (SAMM) chief Badrul Hisham Shaharin (left), two companies in Johor have been allegedly exporting palm oil to Israel via Tanjung Pelepas and Pasir Gudang.The palm oil is shipped to one of Israel’s largest ports, Ashdod, said Badrul, popularly known as blogger Chegubard.Chegubard said he has Customs forms and booking confirmations of the Johor palm oil exporting companies to back his allegations.“We even have photographic proof that an Israeli government official has come to Johor to inspect the palm oil shipment before being shipped to Israel,” he claimed.“By right, this is against the law as we do not have diplomatic ties with Israel,” he added.Chegubard said SAMM is sending a letter to the Ministry of International Trade and Industry about his findings and hoped that he will receive a truthful and immediate response.He added that if he does not receive a proper response immediately, SAMM will proceed in two weeks’ time with the revelation and publication of the documents to prove to the public that the Malaysian government was “cheating” its citizens.“They claim to be heroes of Palestinians. They blame others for being pro-Israel but these documents prove that the Malaysian government is an ally to Israel, and is contributing to their economy,” he told reporters in Komtar today.“They are traitors to the country, if this is true. Pretending to be heroes of Palestinians but in actual fact, aiding Israel,” he said, adding that the group would continue to seek for revealing documents and publish them to raise the awareness of citizens on the hypocrisy of BN-Umno government.SAMM’s allegation is a backlash to BN, especially Umno’s attack on Opposition Leader Anwar Ibrahim of being an agent of Israel.Anwar’s recent statement on Israel has kicked up a storm within the Muslim community with Umno leaders bashing the PKR supremo for his pro-Israel stance, which was published in an international newspaper.Anwar has denied the allegations, saying his remarks were taken out of context.

In Nov 7 last year, MITI, in a written reply to Bakri MP Er Tech Hwa in Parliament, had said that Malaysia did not have any trade relations with Israel as trade was prohibited under the 1967 Customs Act (revised 2008).

Report: M'sia is one of top 15 trading partners with IsraelHowever, a European Commission of Trade, European Union report on June 8 last year revealed that Malaysia remains one of the top 15 out of 50 trading partners of Israel.On Nov 9, MITI deputy minister Mukhriz Mahathir, in his speech during the 2012 Budget debate, had said that a cabinet meeting had approved applications by multinationals to carry out export-import transactions with Israel.“This raises the question whether the country is facing a big crisis where legal provisions are set aside with one decision from the cabinet,” Er had then said in a statement.In a related development, Chegubard claimed that documents in his possession revealed that Malaysia has been exporting no less than 100 tonnes of palm oil monthly with Israel.These transactions have been going on for not less than a year, he noted.“What is more surprising is that on one of the companies’ websites, it is mentioned that one of the companies supplying the palm oil is Felda,” he said.“MITI says that only MNCs are allowed to trade with Israel, but what about these two local companies?” he questioned.