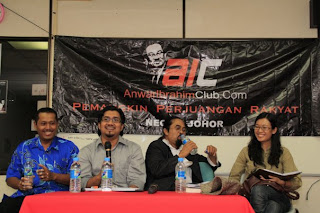 Johor Bahru, Jan 16 - AIC(Anwar Ibrahim Club) hosted a forum at Hotel Kelana in JB. The forum was part of the 'Program Penjelajahan 10 kota' touring Malaysia that aims to clarify the history of UMNO-DSAI conflict. Details of the book 'Anwar on Trial : In the face of Injustice' was used as a reference.

The speakers for the night were Hishamuddin Rais (prominent ex-ISA detainees), Chegu Bard (PKR) and Ginnie Lim (PKR). Of the three, Chegu Bard occupied more speaking time while Ginnie Lim the less.
The Speakers
Chegu Bard a fiery hillarious orator revisited the details of DSAI-UMNO conflict which subsequently led to DSAI dismissal, blackeye incident, Sodomy 1 and Sodomy 2. All of which are already very familiar, especially for Malaysia-Today readers. Other than the above, Chegu Bard offer some fresh points on the current relevancy of DSAI and also the role of youth in reforming this country. To summarize DSAI or other Pakatan leaders are not perfect guarantees to us. They can only bring the rakyat to the 'Door of Change'; the youth themselves must see it through. He cites the movement of 'Indonesian Mahasiswa' as an example. Though not lacking in reformist spirit, they were not prepared in terms of 'minda' as a result the process change in Indonesia is a slow one. 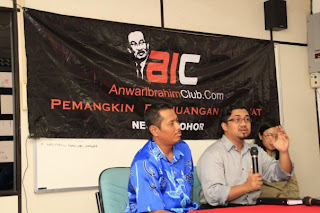 I was not able to catch clearly what the pleasant Ginnie Lim spoke. If I am not mistaken, it was to repeating the need for general public to see beyond DSAI into the the problems plaguing our society.

Hishamuddin Rais spoke more the structure of our constitution and society. He tried the drive home the point that we must rid ourselves of taboo and illusion whenever we talk of anything sensitive. He prescribe to see things in light of history and the development of civillization in general. In reply to a question on adapting socialism into Malaysia, Hishamuddin pointed out that the priority is to established democracy first. There is no point going into socialism or whatever ism when the people have no power to change things.

Hishamuddin summed up the night that 'Sodomy 2' will be the last round of DSAI vs Najib. One of them will definitely fall. - Anak Bangsa Malaysia Selatan.