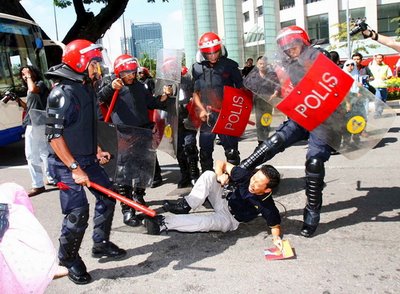 Background of the incident:
In protest to the sharp fuel price hike, three peaceful protests had been organized by a number of NGOs, political parties and the MTUC (Malaysia Trade Union Congress) on 3rd, 10th and 26th of March 2006 in front of the KLCC. On the 26th of March, the police dispersed the peaceful crowd violently and arrested 22 protestors. Many protestors were injured due to police brutality. A complaint was submitted to SUHAKAM on 31 March 2006. On 28 May 2006, the Coalition to Protest Fuel Price Hike (PROTES) once again organized a demonstration in front of KLCC to voice the plights of all Malaysians who are heavily burdened by the fuel price and electricity tariff hike. Unfortunately, the peaceful assembly was dispersed by the police with brute force and excessive violence. 20 people were arrested, including one minor. Many protestors were beaten and kicked by the Federal Reserve Unit (FRU) personnel. Several protestors were badly injured. The tragic day was dubbed “Bloody Sunday”.
After filing complaint to SUHAKAM, civil society groups made numerous efforts to urge SUHAKAM to hold public inquiry on police brutality in the aforesaid demonstration. After a long wait, SUHAKAM has finally agreed to hold a public inquiry into the incident.

Police’s Video Confirmed that the Assembly was Peaceful

After allowing lawyers to assist in the inquiry, Dato’ K.C. Vohrah, the chairperson of the inquiry panel kicked off the inquiry by calling the first witness, Chua Tian Chang (hereinafter referred to as Tian). Tian was one of the main organizers and he is now the Information Chief of Parti Keadilan Rakyat.
1st witness: I saw a pool of blood on the ground. Police should have learnt from other ASEAN countries 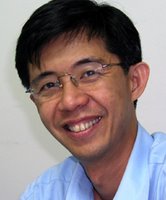 Tian was asked about the overall situation on the day of the demonstration. The inquiry panel inquired in detail on the incident. The inquiry panel also asked some questions about the Anti Fuel Price Hike Coalition – PROTES. Tian has given the SUHAKAM panel a full picture of the incident.
According to Tian, there was a heavy police presence on the day of the protest. The organizer has made it crystal clear that the demonstration on 28 May will be the last of the series of anti fuel price hike protests. Tian also told the inquiry panel that Dr. Hatta, the coordinator of the anti fuel price hike coalition (PROTES) had also reiterated this message in his speech on the day of assembly.
Besides, Tian told the inquiry panel that he could not hear the OCPD when the officer warned the crowd by using loud hailer. It was due to the noises caused by the helicopter and the warning was given when speaker, Ronnie Liu was delivering his speech. Tian told the inquiry panel that he saw a pool of blood on the ground after the police had left the scene. Towards the end of his testimony, Tian criticised the police for being selective in allowing public assemblies. He told the inquiry panel that the Malaysian police should have learnt from other ASEAN countries on how to handle big crowd, especially when the ASEAN Police Conference has just concluded.
2nd witness: Water cannon hit me on my stomach, and I was dragged rudely by the police 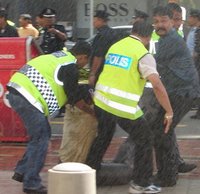 Second witness was Badrul Hisham Shaharin, the coordinator of an anti-corruption organization, GERAK. Badrul Hisham Shaharin (hereinafter referred to as Badrul) was the emcee of the assembly on 28 May. He was eventually arrested by the police.
Badrul told the inquiry panel that he was the one who started off the assembly. After a short introduction, he then passed the microphone to the coordinator of the assembly, Dr. Hatta to deliver his speech. Badrul recalled, Dr. Hatta only spoke for a very short while and the second speaker took over. When the third speaker, Ronnie Liu was speaking, Badrul heard some noise from the police but he could not hear clearly what the OCPD was trying to address. He thought the OCPD might be requesting the crowd to disperse, so he tried to communicate with the OCPD through sign language. After some exchanges, he was made to understand that the police was giving them another 5 minutes. Unfortunately, water cannon were unleashed from the truck after hardly two minutes.

The water cannon hit Badrul on his stomach and he fell to the ground because of the force. He was immediately surrounded by 5 to 6 police personnel and was rudely dragged for some 30 yards. According to Badrul, his pants were torn due to the crass dragging. He was then handcuffed and placed into the paddy wagon. He saw Zahir Hassan, the deputy secretary general of Parti Keadilan Rakyat in the wagon. Zahir was badly injured and his mouth was seen bleeding.Badrul told the inquiry panel that he was not prosecuted to date.
3rd witness: The video was not doctored 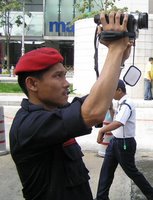 The third witness of the inquiry is Lance Corporal Mohd Nasarudin Hashim. Mohd Nasarudin Hashim (hereinafter referred to as Nasarudin) is a FRU personnel, who was instructed to record video during the 28 May assembly. Nasarudin told the inquiry panel that the FRU commander who instructed him was Chief Inspector Pusparajen.
Nasarudin also told the inquiry that Chief Inspector Pusparajen did not direct him to film any specific scene. He testified that the video was not doctored.
The 17-min video was played at the inquiry. The video has clearly shown that the gathering was peaceful until the police acted.The inquiry adjourned at around 4:30pm and further questions will be asked of Nasarudin on the next inquiry date. Representatives of the FRU, police and Attorney-General’s Chamber were invited by SUHAKAM as observer but were not present today.