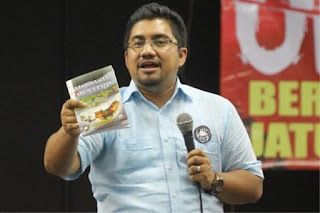 KUALA LUMPUR: Several groups aligned to the Opposition have slammed the movement allegedly led by Tun Dr Mahathir Mohamad to oust Datuk Seri Najib Tun Razak as Prime Minister.
Badrul Hisham Shahrin, popularly known as Chegubard, acted as spokesman of Saturday’s gathering here that brought together a number of speakers from various groups.
He said the groups called out for the rejection of Dr Mahathir as the movement’s leader, reminding participants of his alleged transgressions against the people and country during his tenure as prime minister.
“This is a dead end. This is just a clash between Mahathir and Najib.
“We have been fighting against both of them. Why is it that now we must choose between them?” said Badrul.
Dr Mahathir, together with a group of key political and civil society leaders, had initiated a citizens’ declaration demanding Najib’s removal as Prime Minister.
“Why does this initiative, this citizens’ declaration exists?
“It is because the people are scared. It is because the people did not rise up,” claimed political activist Haris Ibrahim.
According to Badrul, they believe that Dr Mahathir was only using the move for his own political agenda and not in the interests of Malaysians.
Many of the speakers at the event recalled the days when Dr Mahathir was prime minister and attribute what they described as the degradation of the country’s institutions to his time in power, especially in the 1998 reformasi (reformation) era.
“We cannot raise him up as a figure of change.
“If he fights, that’s all right. If we (the people) make use of him, that’s all right. But to prop him up as the leader and place him in the front, that is not right,” claimed Badrul.
Another concerned participant asked why was the declaration’s signatories did not consult the public, or at least their respective party members, before signing it.
“Why was there no consultation? Why was no feedback taken? Why so secretive?
“Bersih was about to have a roadshow. If they were going to organise a roadshow, why didn’t they use the roadshow to get feedback before signing the declaration?” asked Kohi Kogi, a member of Jaringan Rakyat Tertindas (Jerit).-thestar
by cheguBard at 2:26:00 PM